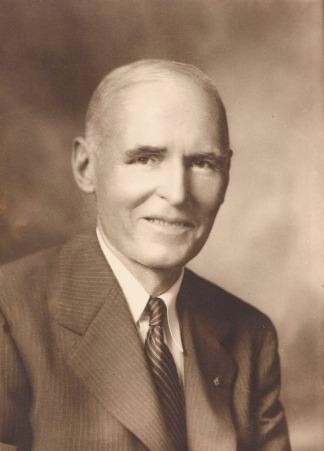 Robb was born on 18 May, 1887 in Assaria, Kansas, a small farming community. In the early 1900s, he attended the Park College Academy, a preparatory school, which instilled the “formation of habits of application of study.” Following his Academy years, in 1908 he began his studies at Park College (now Park University) and graduated in 1912. Robb continued his education by attending Columbia University (New York City) and graduated in 1915 with a master’s degree in American History.

Robb was an instructor in American History for four years before the war and selected principal of the Great Bend High School (Great Bend, Kansas) in the spring of 1917 but resigned to join the U.S. Army. He attended officer training at Fort Sheridan (Illinois) between 27 August and 26 November, 1917.

He was brigaded with the 4th French Army commanded by General Henri Gourand. Robb was engaged in the Champagne-Marne, Aisne Marne, and Meuse-Argonne theaters with members of the “Harlem Hellfighters.” Less than a week prior to the engagements at Séchault and Rosier, where he was severely wounded, his promotion to First Lieutenant was bestowed. In 1919, Robb received the Medal of Honor in Salina, Kansas:

“The President of the United States of America, in the name of Congress, takes pleasure in presenting the Medal of Honor to First Lieutenant (Infantry) George Seanor Robb, United States Army, for extraordinary heroism on September 29 & 30, 1918, while serving with 369th Infantry, 93d Division, in action at Séchault, France. While leading his platoon in the assault First Lieutenant Robb was severely wounded by machinegun fire, but rather than go to the rear for proper treatment he remained with his platoon until ordered to the dressing station by his commanding officer. Returning within 45 minutes, he remained on duty throughout the entire night, inspecting his lines and establishing outposts. Early the next morning he was again wounded, once again displaying his remarkable devotion to duty by remaining in command of his platoon. Later the same day a bursting shell added two more wounds, the same shell killing his commanding officer and two officers of his company. He then assumed command of the company and organized its position in the trenches. Displaying wonderful courage and tenacity at the critical times, he was the only officer of his battalion who advanced beyond the town, and by clearing machinegun and sniping posts contributed largely to the aid of his battalion in holding their objective. His example of bravery and fortitude and his eagerness to continue with his mission despite severe wounds set before the enlisted men of his command a most wonderful standard of morale and self-sacrifice”.

Robb returned to Kansas following the war and served as postmaster of Salina, Kansas, from 1923 to 1935. In 1935, he was appointed Kansas State Auditor and was re-elected in that position until 1957.

He was married to Winona McLatchey and they had two daughters, Mary Jane Sage and Georganne Welty. He died on 14 May, 1972 in Topeka, Kansas.

This is a red letter day. I went onboard the steamer Olympic . . . at Pier 59 North River. The destination of the steamer was Liverpool, England. It took some time to get onboard as there was a long line of officers ahead of us. Troops were also going onboard. They were under heavy packs and most of them had two pair of shoes over their shoulders. Was assigned to stateroom 140 C deck, three bunkers . . . Lieutenants.
All the help onboard is English. Ship has been carrying troops from Canada to England and the Mediterranean Sea for two years. Was once chased by a submarine but ran away from her. This is the first load of American troops it has carried. The boat is elegantly furnish and the lunch was fine as was also tea at 7 p.m.

At 4 p.m. a meeting was called of all officers onboard in the main saloon. The O.C. [Officer in Charge] . . . talked. Don’t fail to salute him when you meet.

Had a fine nights sleep and an excellent breakfast at 8:30. Took a walk around C deck but it was too crowded for comfort. Later meet the O.C. and did not fail to salute. In the saloon a colonel tried to get away with my campaign hat. Put on his and carried off mine in his hand. I was scared as it is only hat I have. He was an honest man for later he brought it back and apologized.

At 4:30 p.m. everyone was called below deck and the vessel began to move. It is evident that we are off for France. Everybody put on their life savers. It is a beautiful ornament to wear night and day for seven days. Think I will learn to love mine.

Got up in the morning not feeling exactly good, sea seemed very rough, and the boat was pitching a great deal. Went to breakfast but did not enjoy it much.  After breakfast went up to the gym and tried exercising, but it did not improve that feeling down in the pit of my stomach.  Tried fresh air on the boat deck, wind was blowing hard and water very rough.  Fresh air did not improve my health so went down and went to bed, got up in time for lunch, but it did not taste right however did not give it to the fishes, after lunch put on overcoat and went to saloon to wait for boat call none came. Played poker most of the afternoon with Cox, Grantland, and another Lieut.  This is by for the worst day we have had.  Have not fed the fishes yet.

Feel real decent today, the first time for some days.  Were informed that we were getting into the danger zone and the fact was impressed upon us when at 1 p.m. four small specks showed up in the distance.  They developed into four torpedo boats or U-boat destroyers flying the English flag.  Two took position on the Port side and two on the Starboard.  Feel safer from subs than have for some time. Were informed in the evening that it would be well to bed in uniform.  Spent most of the night and early hours of morning playing Pitch and Rummy, turned in at 3:30 a.m.  At midnight clock went forward 74 minutes.

Slept well in uniform and awoke still afloat.  We are in the Irish Sea, heavy fog and rain, occasionally can catch a glimpse of the coast of Ireland on the Starboard side and Scotland on the Port.  English full dogs still with us.  It begins to look as if the skipper has put another trip across on the Germans.  It is said that many vessels have been sunk by subs where we are going.  One of the men saw the mast of one sticking out of the water some five or ten feet.

Late in the evening we anchored out side of the Harbor of Liverpool, practically safe from subs.

Awoke in the morning to find the Olympic at dock in the harbor of Liverpool.  An English fog was on and one could scarcely see the buildings at the water edge.  Dock different from the ones in New York, it is an open one and appears to be floating. Liverpool is on the Havery River, many tugboats and ferry boats plying back and forth. Much smaller than the ones in New York harbor, they seem to have propellers at each end, and are easily handled.  Troops unloaded early, we were told we would stay onboard until 8:00 p.m.  This was postponed from time till time finally at seven p.m. after roll call we landed on English soil saying good by to the Olympic, she looked like a huge monster in the fog and darkness.  Identified our baggage and finally at 8 p.m. were put on board an English passenger train. It was some train.