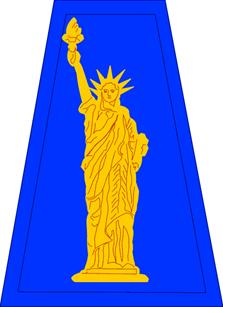 The American 77th Infantry Division, most commonly known as the Statue of Liberty Division, was referred to as a “Melting Pot Division” during the Great War given the extensive diversity of immigrants that served within it. It was the first National Army Division to be made responsible for a sector of the European battlefront, the first division of American draftees to be sent overseas to fight in World War On, as well as the first American contingent to be ordered to an actively engaged section of the Allied lines.

The 77th Division was activated on 18 March 1917 and had organized at Camp Upton in Yaphank, New York, completing its organization in September 1917. Through most of April 1918, the main purpose of Camp Upton was reserved for the training of the men in the 77th, equating to approximately 28,000 men (the standard size of a division at the time). Artillery crews of the 77th Division were forced to train on logs mounted on old wagon wheels given the shortage of artillery and shells the American military held at the beginning of its involvement in the Great War.

Due to the vast diversity of the recruits within the 77th, including a reported 43 different languages being spoken within the unit, training the men proved to be very difficult due to “difficulties of teaching the rudiments of military art to men, however willing, who couldn’t understand. Officers have had sometimes to get down on their hands and knees to show by actual physical persuasion how to ‘advance and place the left foot.’” Despite the difficulties in training the men, the press devoted a great deal of focus on how well the Irish, Jews, Italians, Poles, Greeks, Ukrainians, and Magyars got along under the American banner. 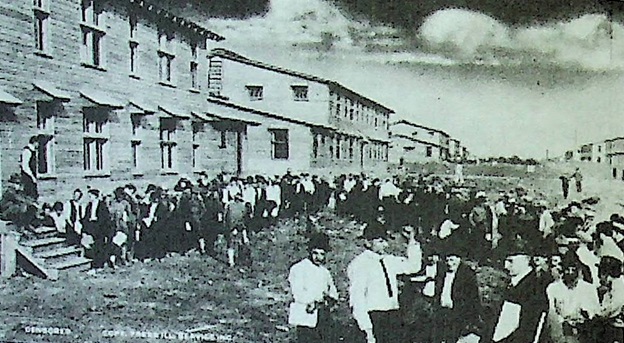 The 77th Division was entirely organized of Selective Service draftees from New York and adjoining counties, and comprised of “men who had only recently been subjected to the pogroms of Russia, gunmen and gangsters, a type peculiar to New York City, Italians, Chinamen, the Jews and the Irish, a heterogeneous mass, truly representative both of the varied human flotsam and the sturdy American manhood which comprise the civil population of New York City.”

In July 1918, the 77th Division went into action at Chateau-Thierry and played a critical role in the Meuse-Argonne Offensive (26 September to 11 November 1918).

Perhaps one of the best known accounts of the 77th Division heroism comes from the 554 men of the 77th Division who became lost on 2 October 1918. Cut off from friendly lines, the “Lost Battalion” was surrounded by the enemy and constantly bombarded by German artillery and machine-gun fire in a ravine in the Argonne Forest.

Organization of the 77th Division: 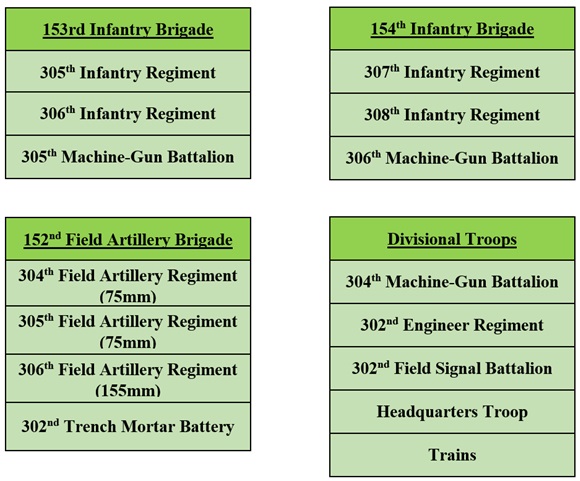 The 153rd and 154th Infantry Brigades battle participation was:

The 77th Division can be described in the following seven phases:

The formative period with the arrival of the first recruits at Camp Upton, New York and training from civilian to soldier being conducted. The training instilled the fundamentals and discipline in the recruits and provided preparation for deployment to France.

The 77th Division took position along the Vesle River in France where it experienced its first encounter with German artillery fire, the accuracy and devastation the German artillery provided had tested the stabilization of the front and the fortitude of the inexperienced troops of the 77th.

A turning point for the 77th Division when it had struggled to establish itself in its development as a combat unit. Each part of the 77th Division had previously functioned separately and the proper coordination to operate efficiently didn’t exist. Subsequently, General Robert Alexander took command and created a significant positive change in the development of the 77th Division. During this period, the 77th advanced and attacked from the Vesle River to the Aisne River with confidence and efficiency. 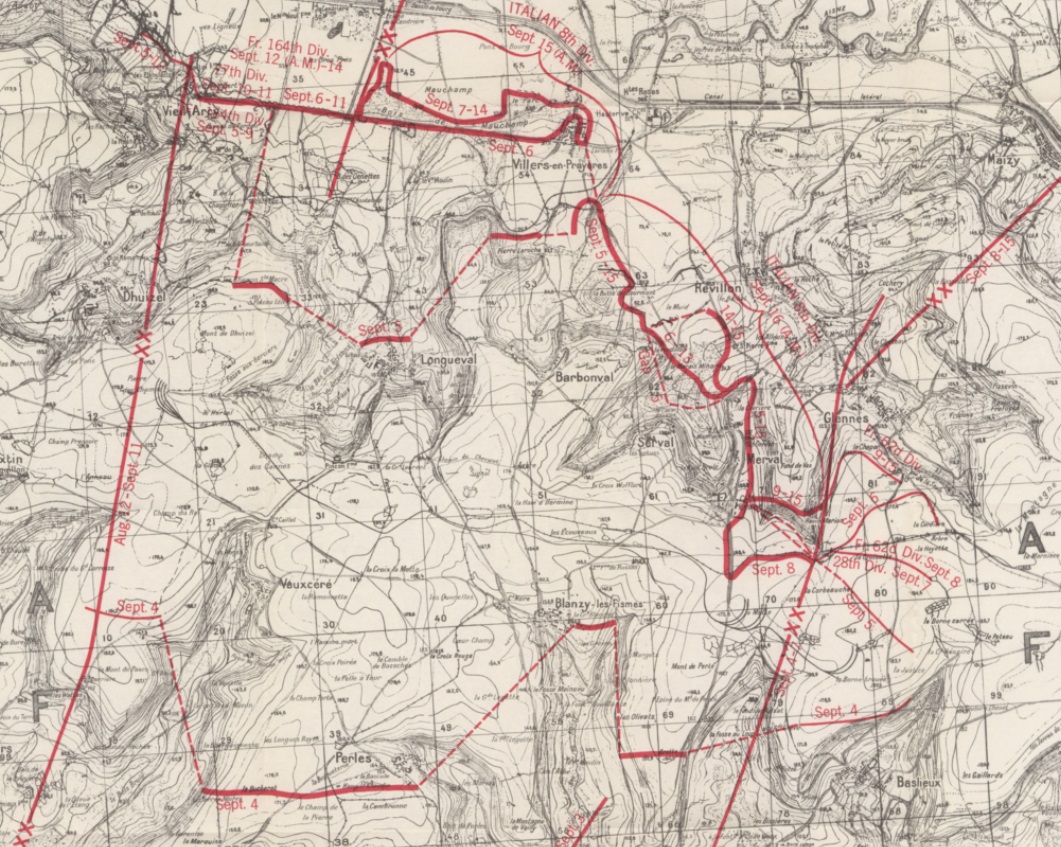 The Battle of the Argonne Forest, as part of the larger scale Meuse-Argonne Offensive beginning on 26 September 1918, commenced and lasted 20 days. During this time, the Argonne was cleared of German units and the Aire River was crossed along its northern boundary. The towns of Grand Pre and Saint Juvin were captured, and the Allied line was firmly established just north of the towns. During the operation to clear the Argonne Forest, the 77th Division had operated within the dense forest at all times and was assigned a front that was initially 7.5 kilometers long. The American 28th Division was located to the 77th Division’s right flank, while the Franco-American liaison known as Groupement Durand, consisting of elements from the American 368th Infantry Regiment, 92nd Division and the French 1st Dismounted Cavalry were assigned to the left flank of the 77th Division to maintain contact with the French Fourth Army during the operation.

The Argonne was considered impractical ground for an offensive, but was cleared of five German division defending the forest regardless. The 77th Division advanced through 22 kilometers of black forests, across a river valley of marsh and mud whereby the commander was congratulated twice during the operation for its remarkable success. It was during this period that the struggles of the “Lost Battalion” would occur. 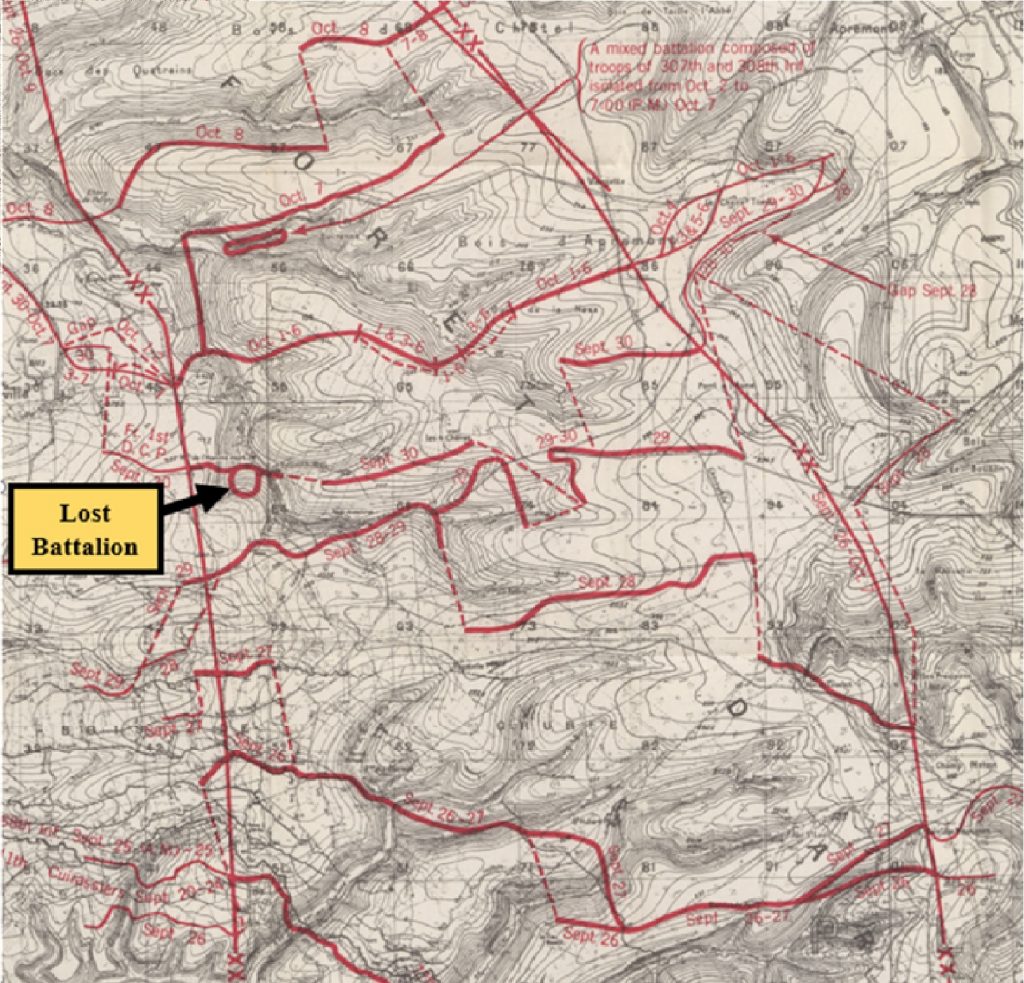 The 77th Division continued its advance from the Aire River to the Meuse River, a distance of 37 kilometers in only 10 days. When the Armistice took effect, the 77th Division advanced a total of 59.5 kilometers from its original line on 26 September 1918 to 1100 hours (11:00 A.M.) on 11 November 1918; its left flank was located less than 2 kilometers east and southeast of Sedan with an advanced outpost across the Meuse River on the eastern bank. Records indicate that no other American division was closer to the German frontier than the frontline of the 77th Division. 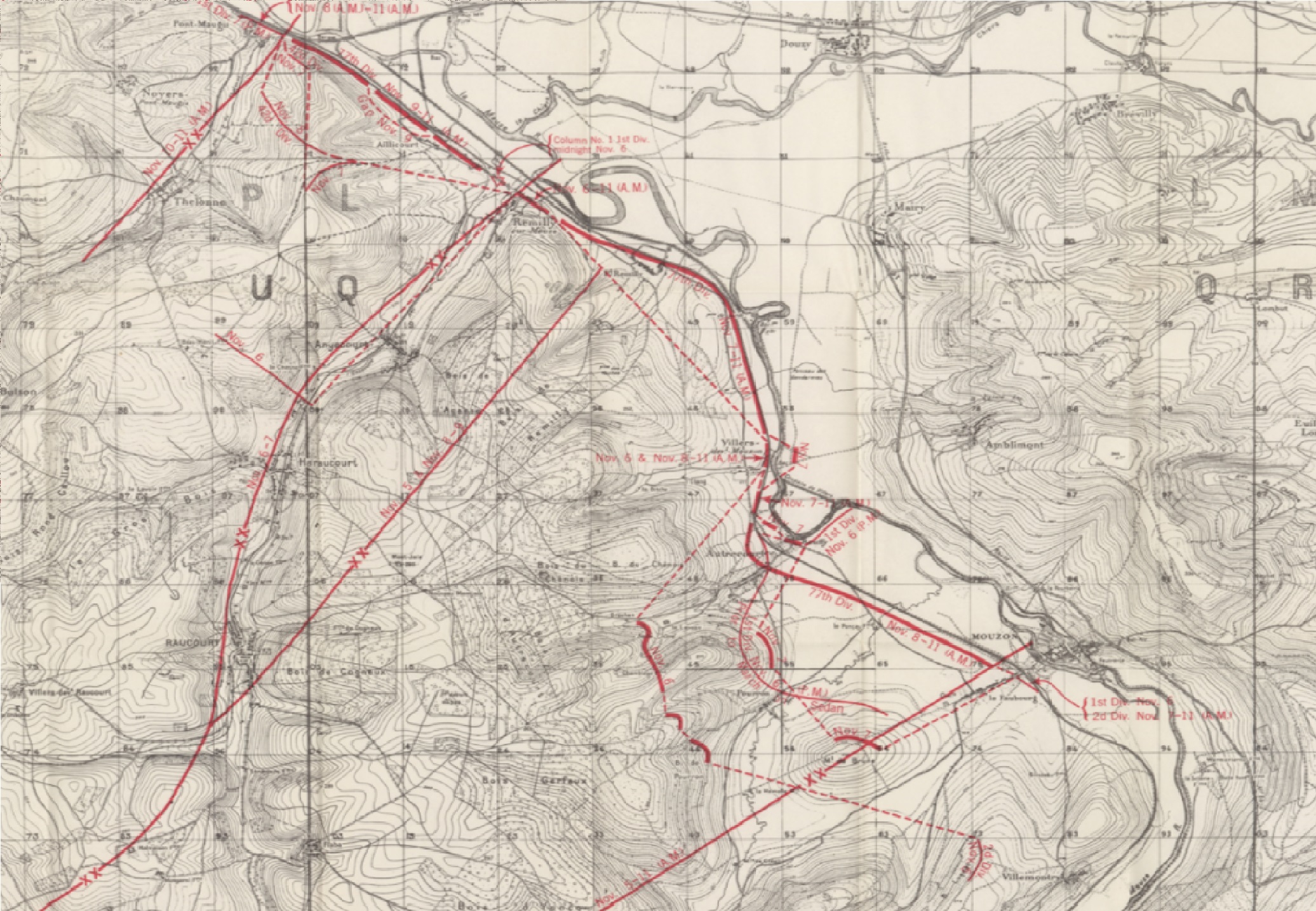 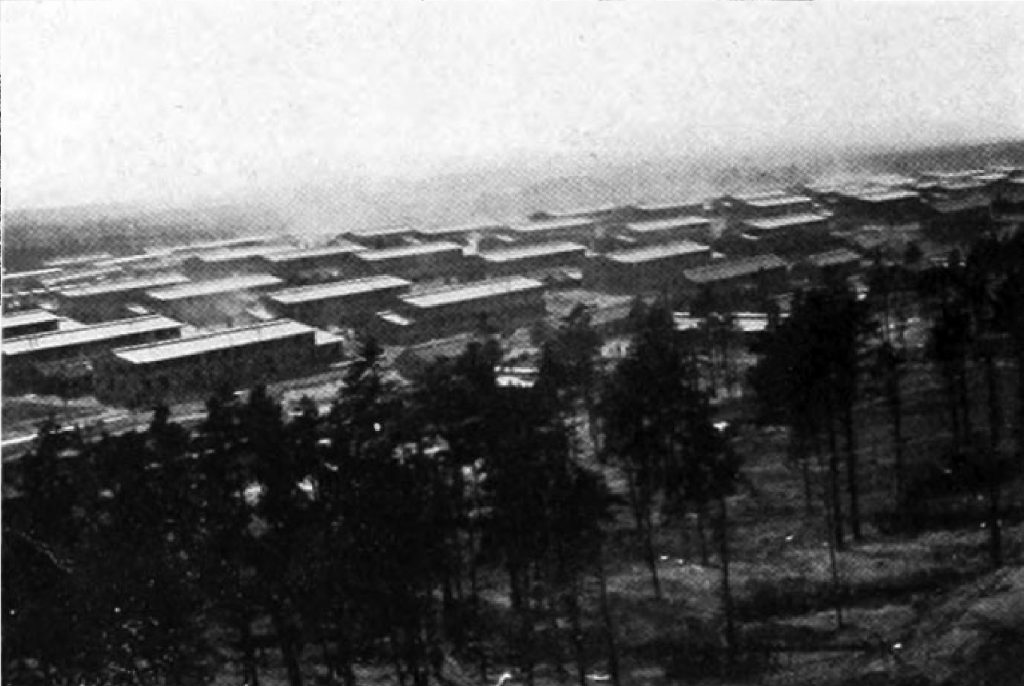 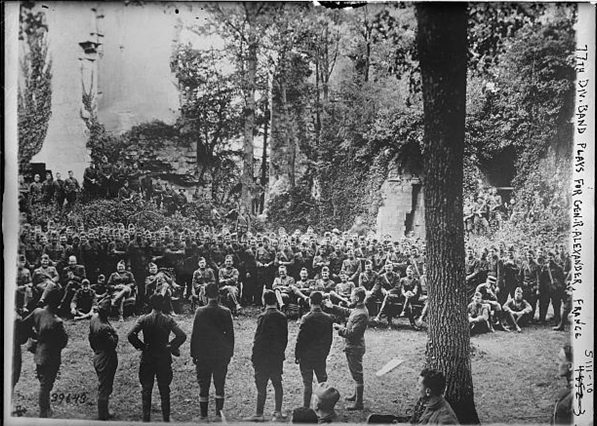 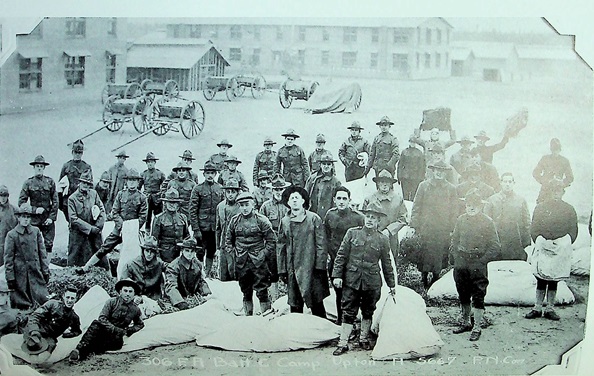 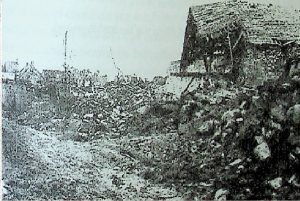 Scarcely a house was left standing in Saint Thibaut. A Street View 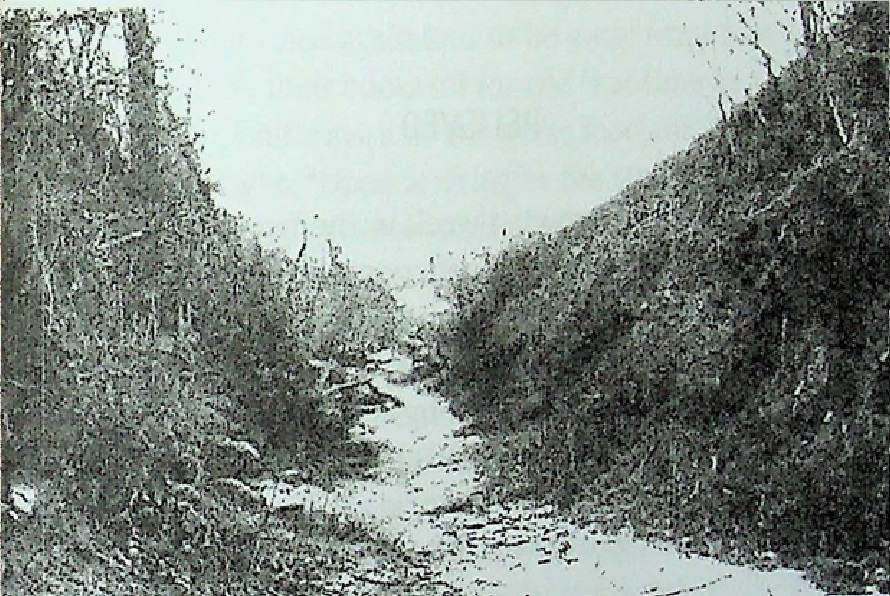 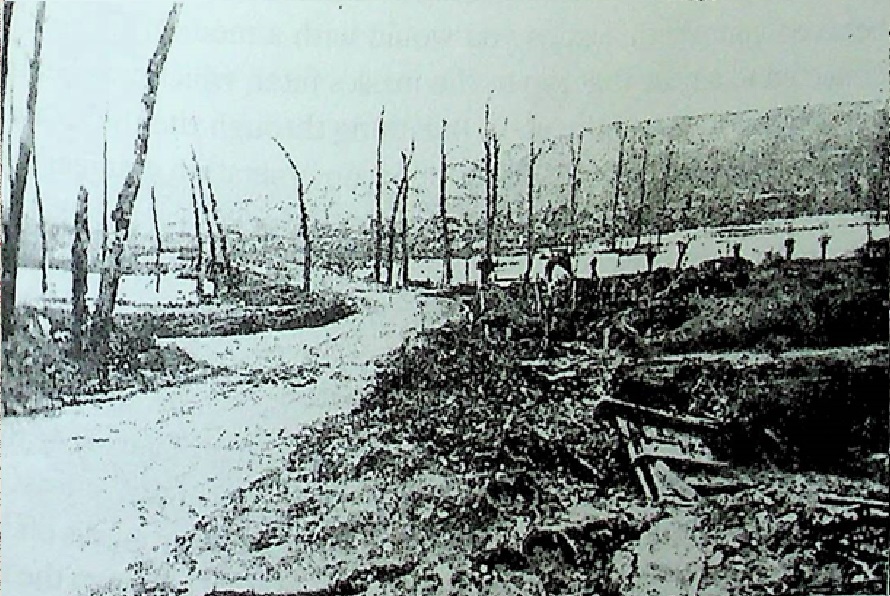 Reconstructed Bridge Over Vesle [River] Between Saint Thibaut and Bazoches, and Formidable Heights to the North 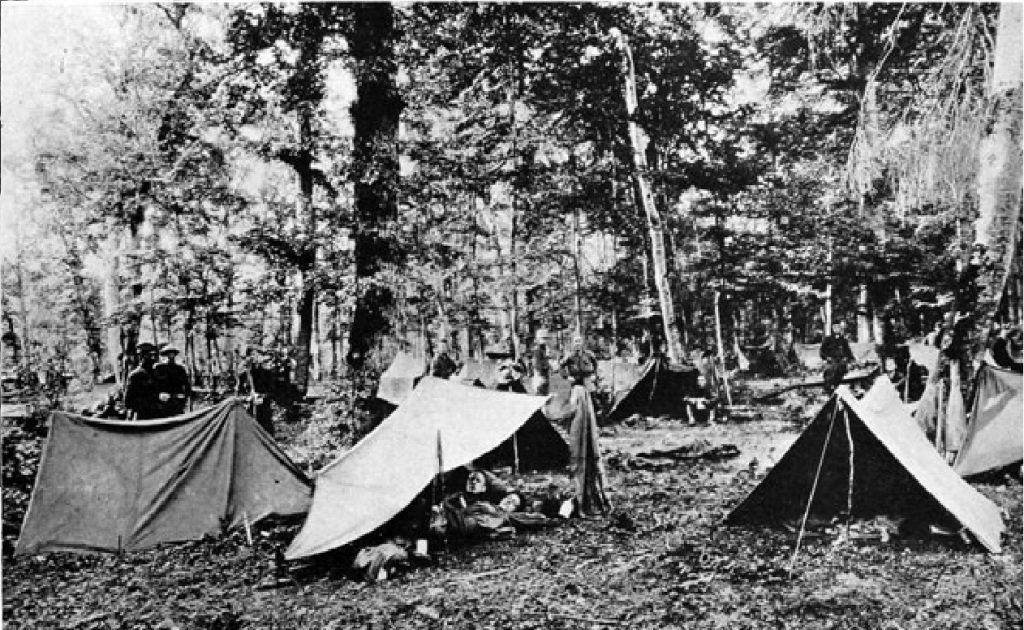 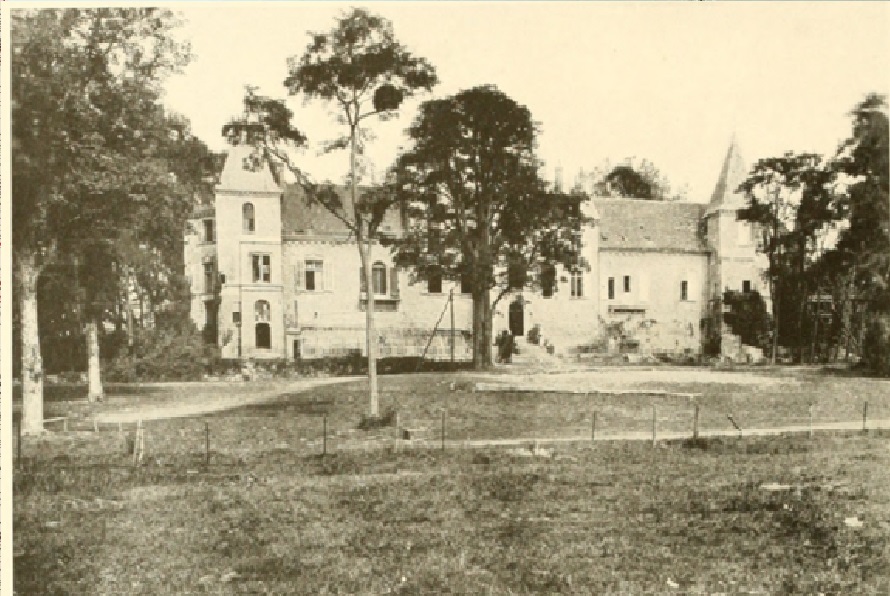 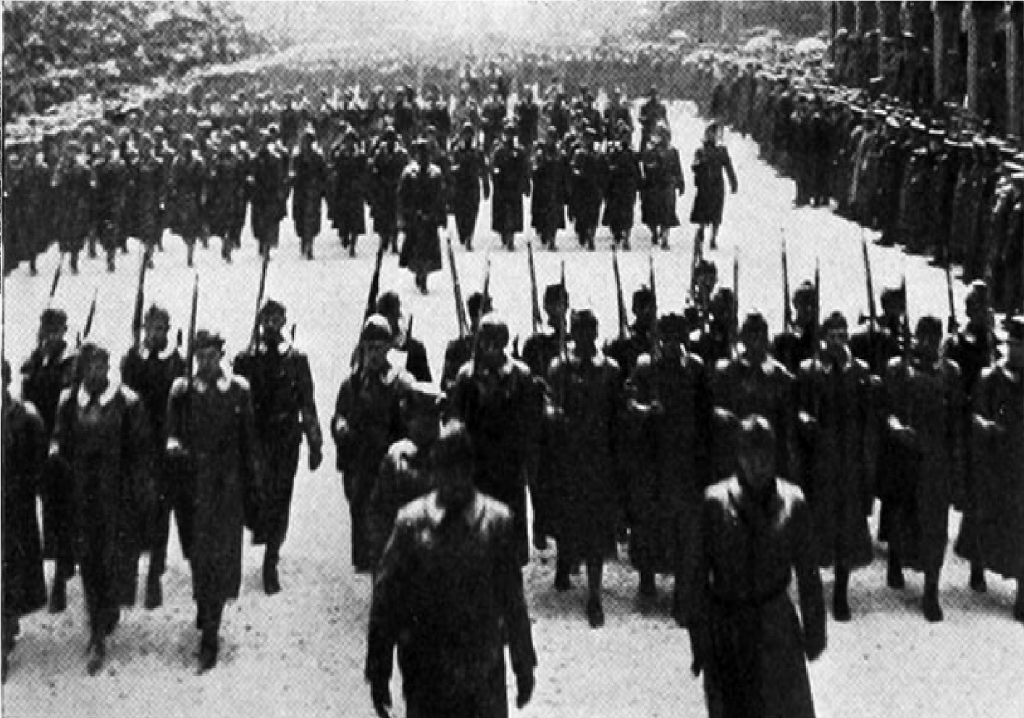 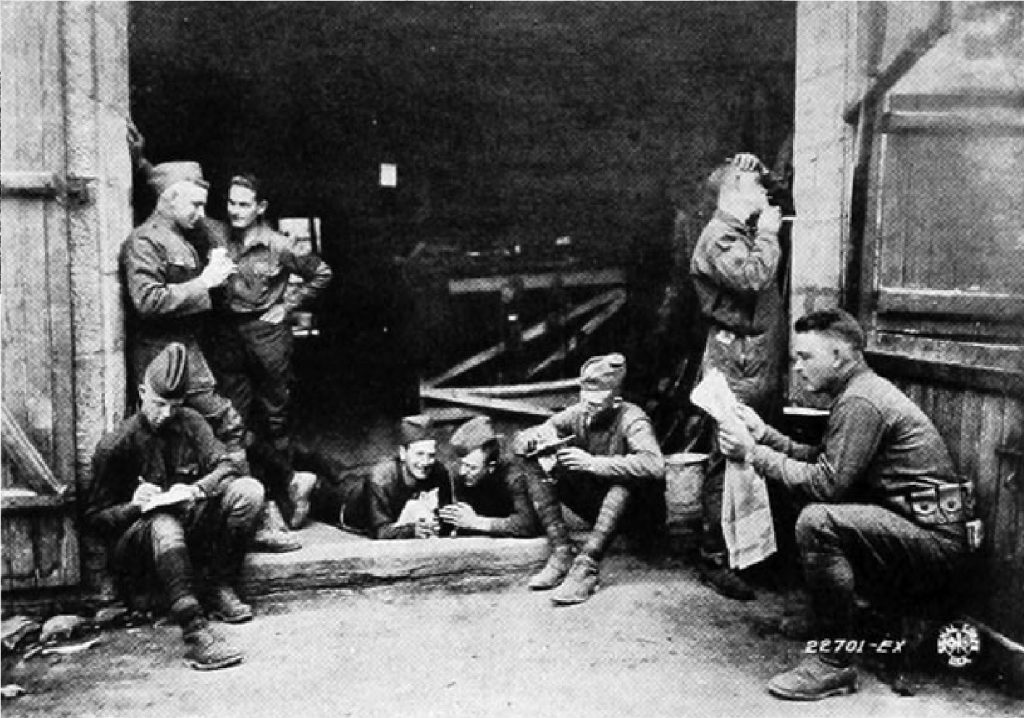 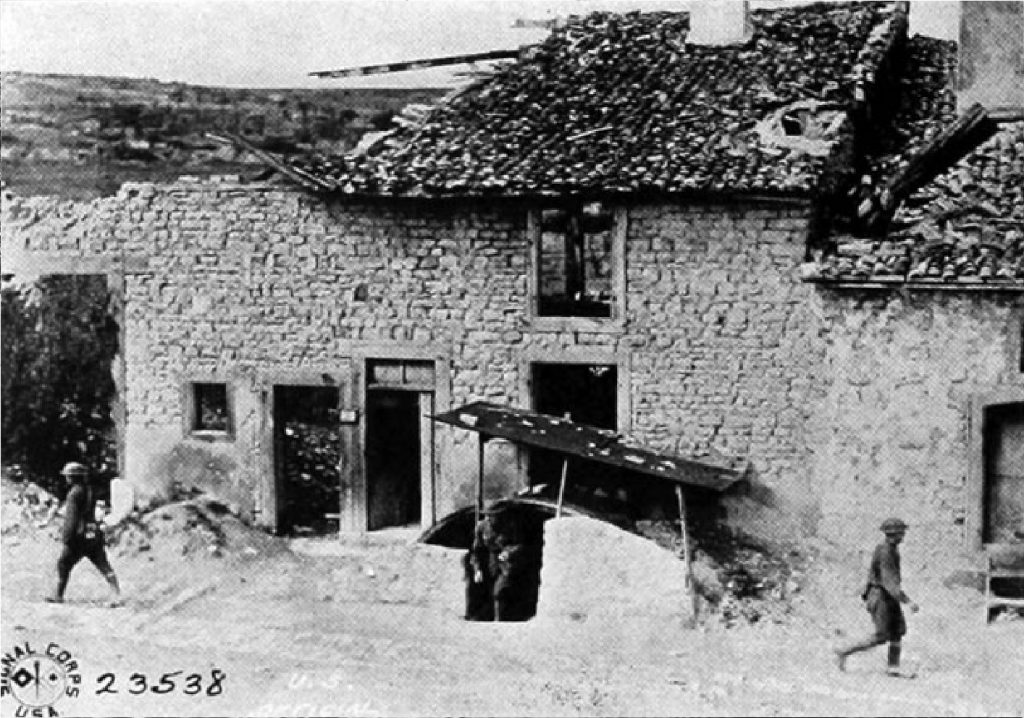 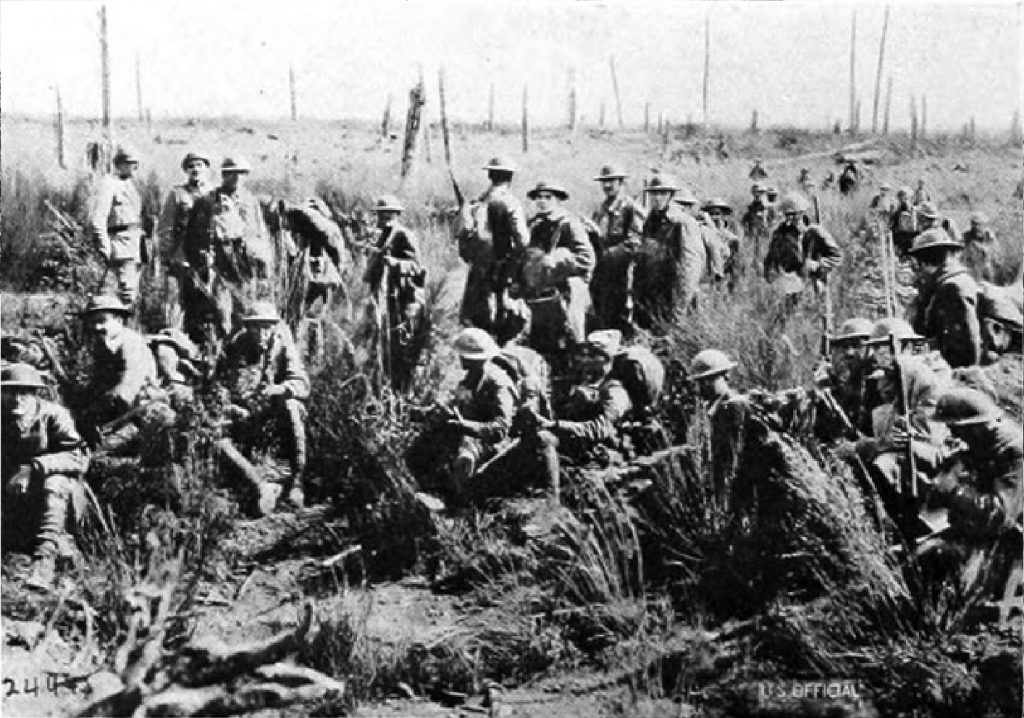 U.S. Official Photo. Grim Business in the Argonne. A Unit of the 307th Infantry Waiting Orders to “Mop Up” 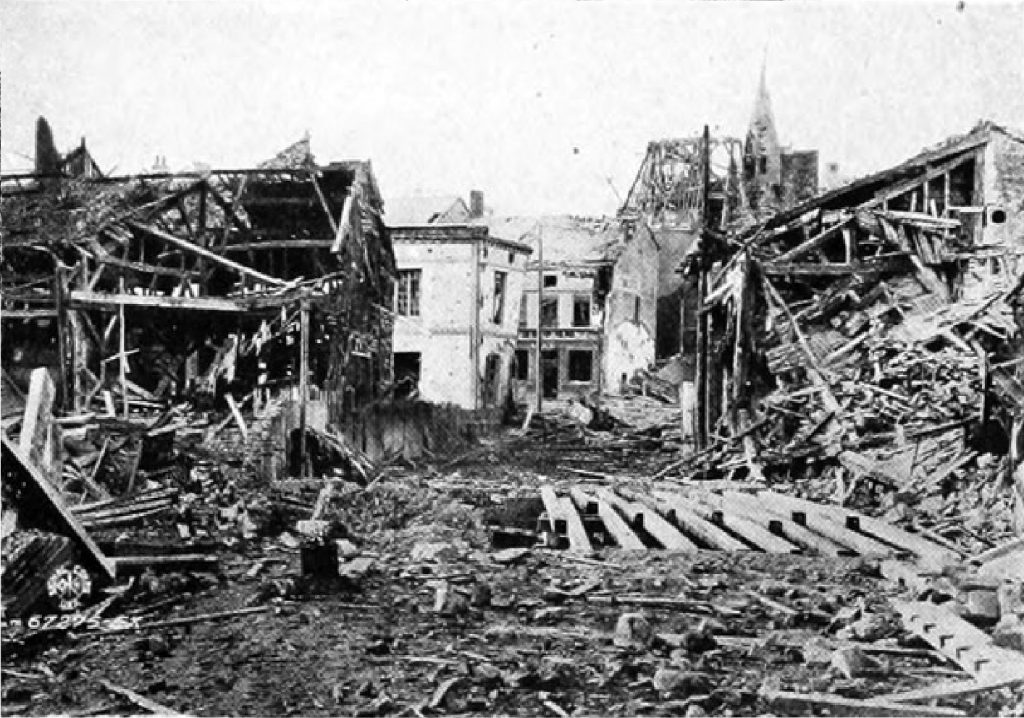 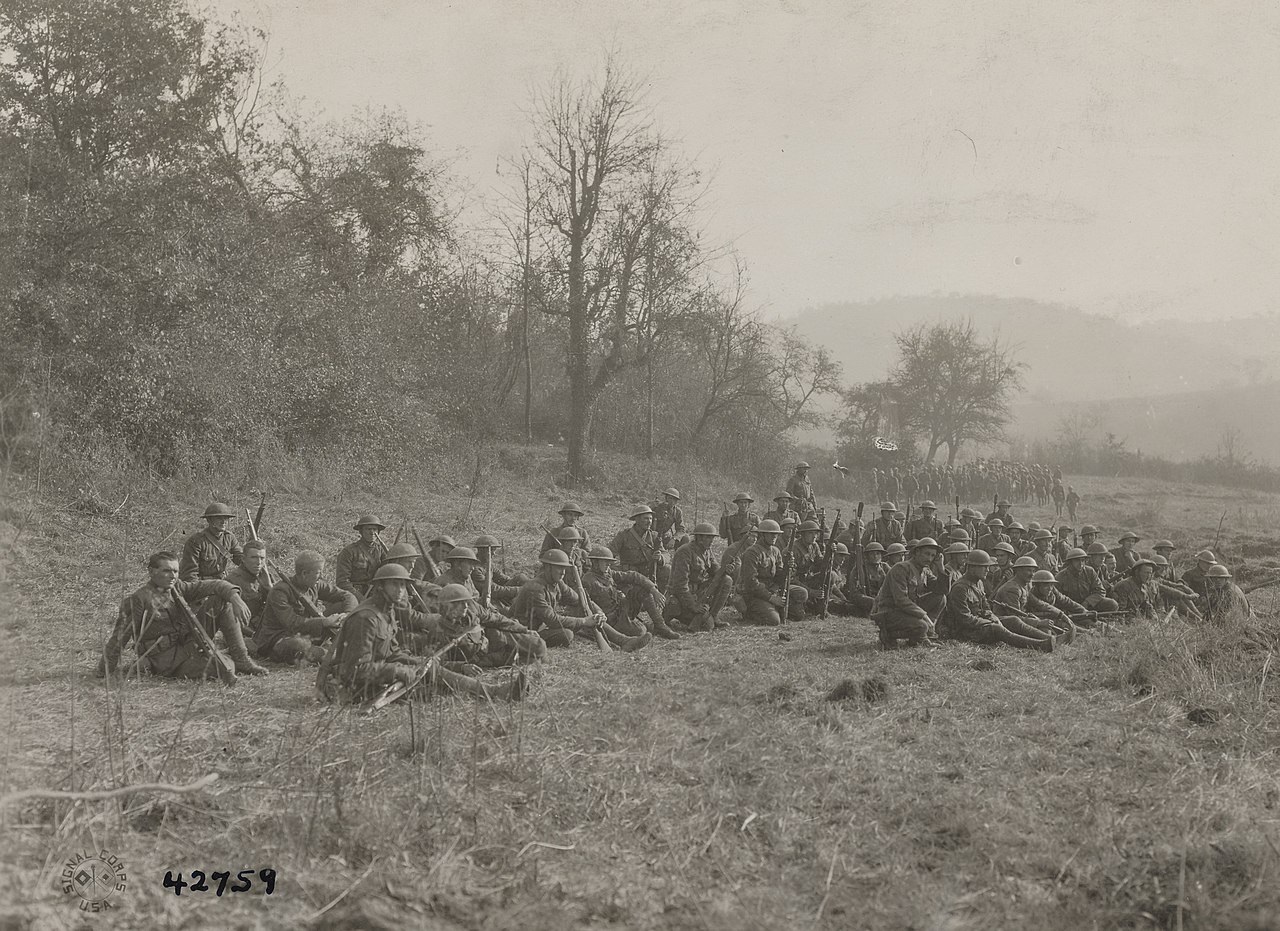 Members of the “Lost Battalion” in Late October 1918 Near Apremont 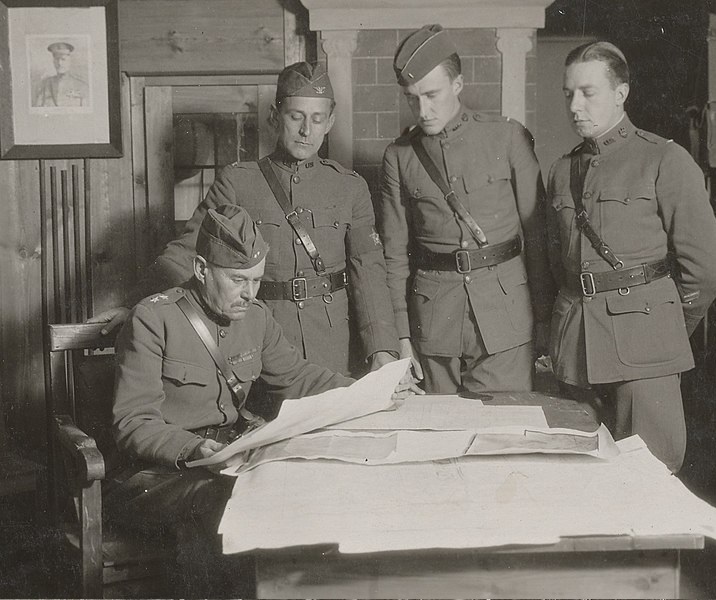 Major Robert Alexander Studying Reconnaissance Data with His Aides Near Varennes-en-Argonne in October 1918. 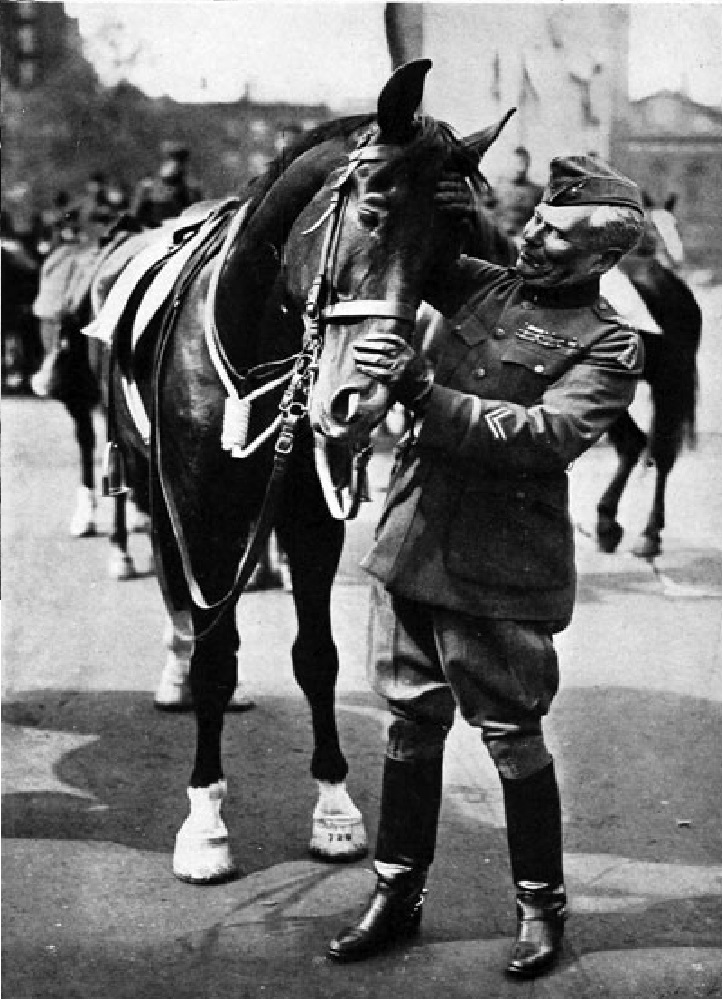 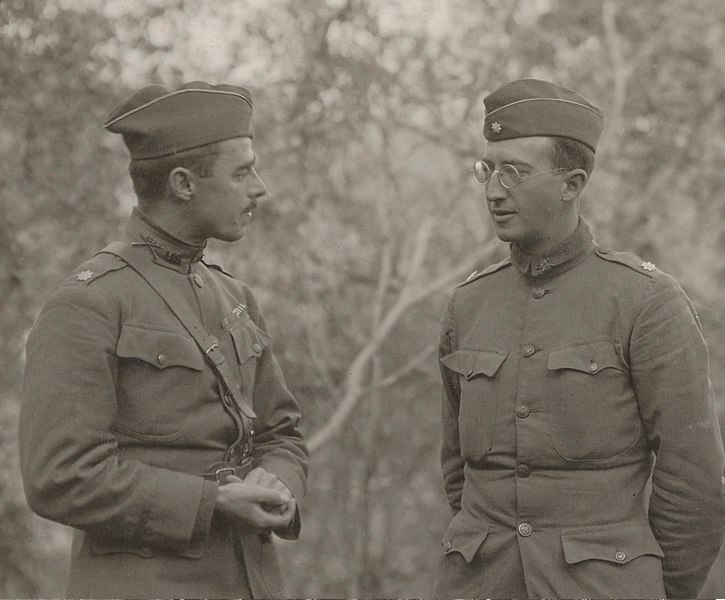 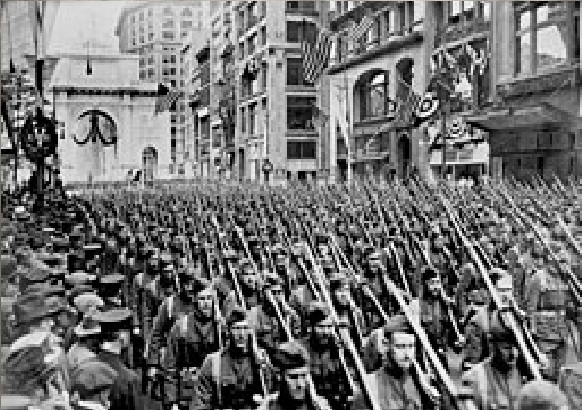 Members of the “Lost Battalion” on Parade, Passing Through the Victory Arch on Fifth Avenue, New York City (1919)

Thee 77th Division was Composed Mostly of New Yorkers of Varied Walks of Life. A Quarter of the Division was Jewish and Many Understood German, Unbeknownst to Their Enemy. 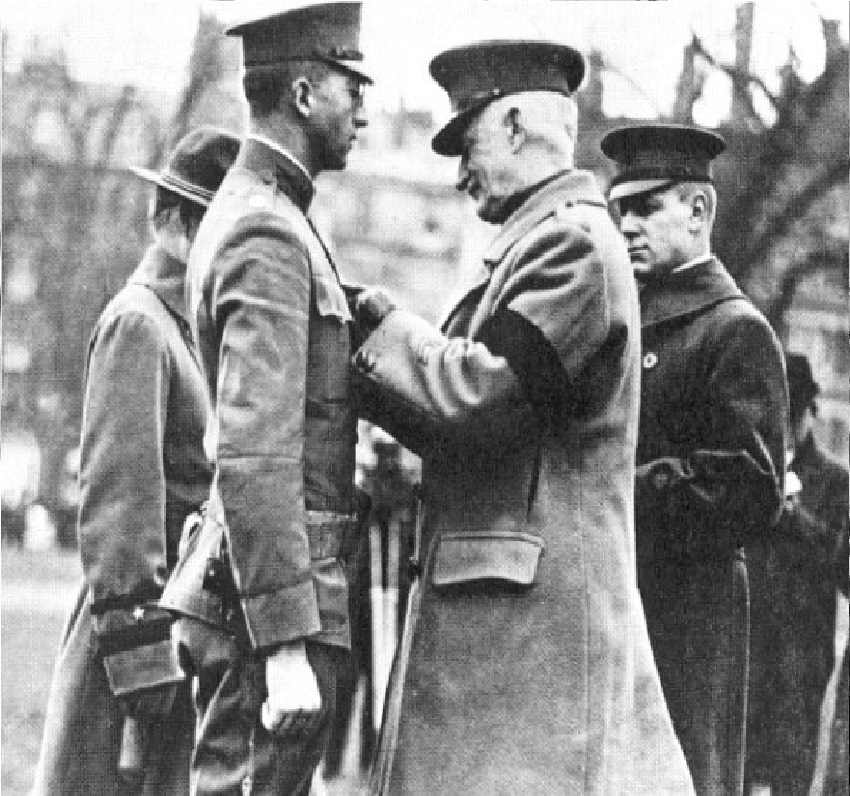 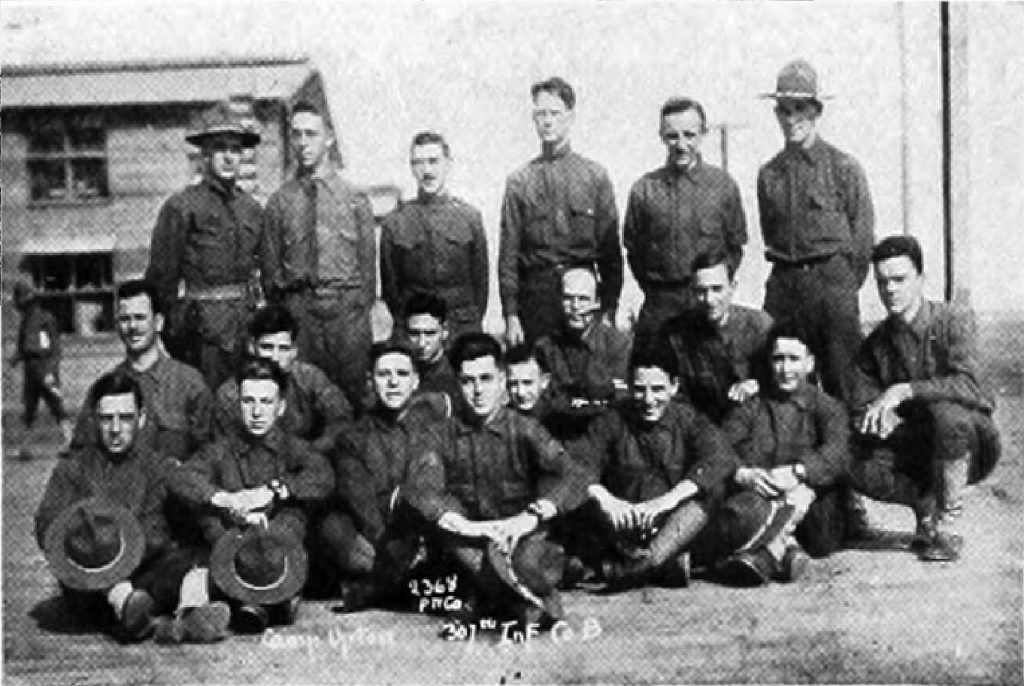 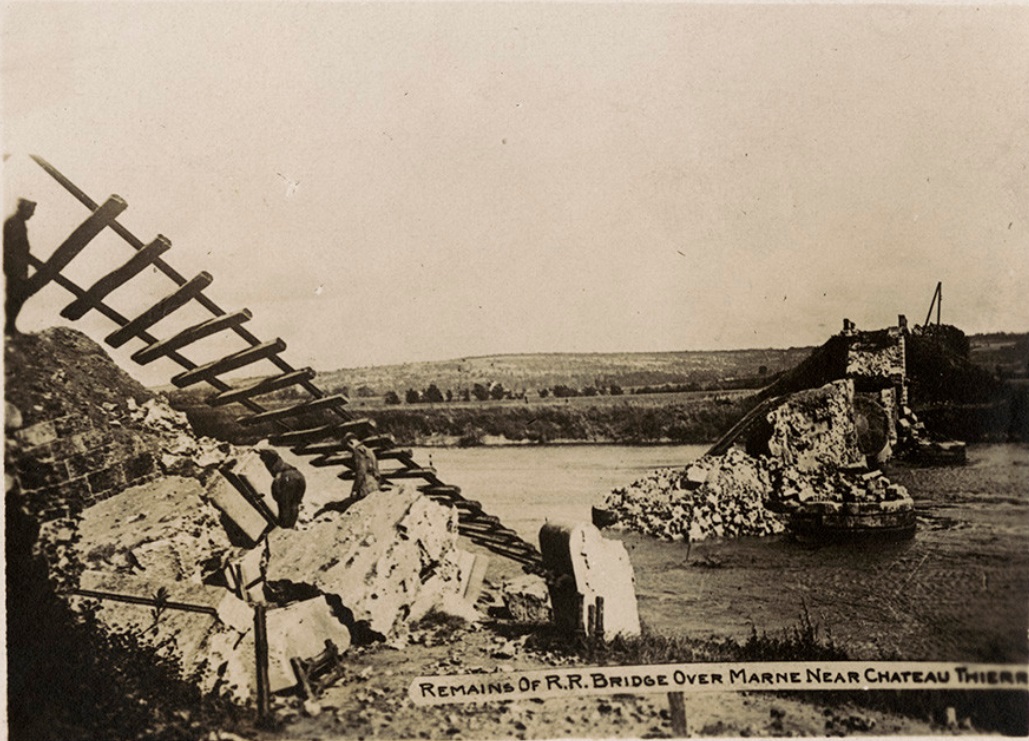 Remains of a Railroad Bridge Over Marne (River) Near Chateau-Thierry, France. The 77th Division went into action near Chateau Thierry in July 1918. 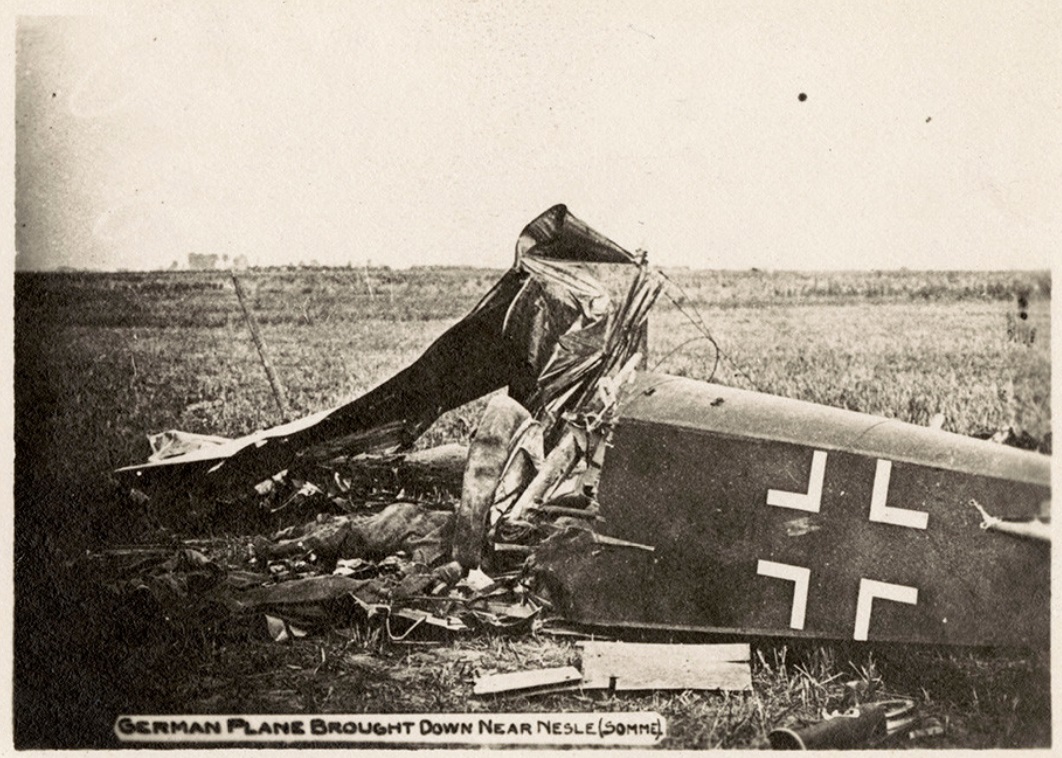